Since at least the fourth century BC when Herodotus, the Greek philosopher, reportedly criticized lavish funeral practices1, a common complaint about the funeral business has been that the cost of dying is too high. We’ll look at funeral price ranges in detail in a later post, but for now I’ll note the price of a funeral can easily surpass $10,000, depending on where you live, and cremation might be had for as little as $1,000, also depending on where you live.

In his 1921 study of funeral costs, Quincy Dowd recommended cremation “because enlightened choice sees therein a beautiful and economical, not to say Christian, practice.”2 Forty-two years later, Ruth Harmer said the rate of increasing funeral prices was so steep that regardless of how frugally they lived, most people were “dying beyond their means.”3

And we won’t even mention She Who Shall Not Be Named.

Whether something is “too expensive” is not an easy question to answer without context. Providing that context is one of the main rationales of Rational Death.

In comparison to other things we buy, prices of caskets and overall funeral expenses have increased more quickly. That is the conclusion of a recent report by the U.S. Bureau of Labor Statistics (BLS) titled “The rising cost of dying, 1986–2017.”

As shown in the following graph “the price of funerals in the United States has risen almost twice as fast as consumer prices for all items. From December 1986 to September 2017, funeral expenses rose 227.1 percent, while prices for all items rose 123.4 percent.”4 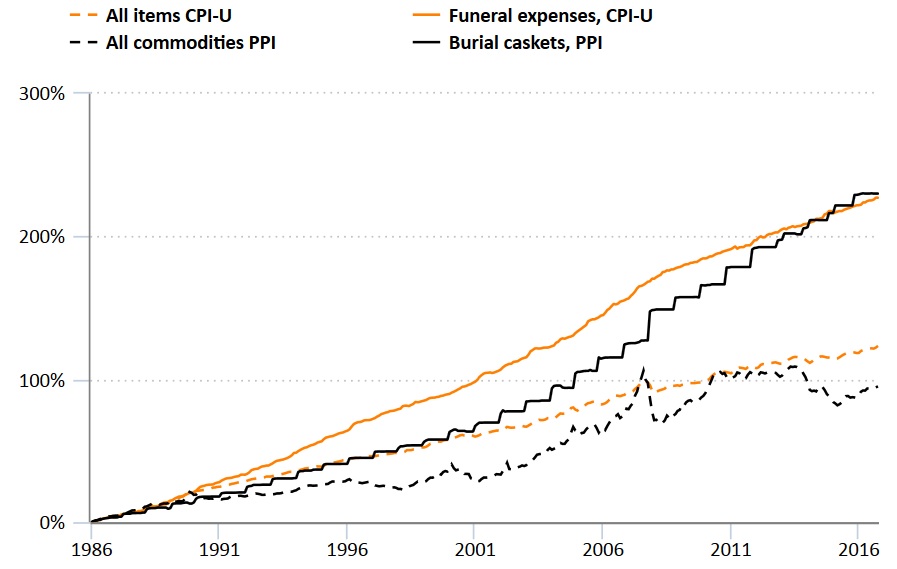 The report highlights the even more rapid increase of casket prices:

It is interesting that the jump in funeral costs above the CPI began in the early 1990s. More on this in a future post.