The next piece in our data puzzle is the reason for the projected future death totals in America. Here we learn that the secret to predicting deaths, is births.

To cut right to the chase, this chart from the U.S. Census Bureau “Current Population Reports”1 tells the story:

Data tables and several additional charts will give a fuller picture, but this one graphic shows why funeral-related businesses are likely entering a tumultuous period, why people who invested in “death care” stocks in the 1990s later asked themselves “what was I thinking?” and why our funeral practices may change in important ways.

Someone looking at business sectors to dabble in during the next 30 years may well wonder if the Census people were sending a message by making the bars on the right side green.

As we will see in future posts, cashing in on death-related services is not as solid a proposition as, say, elder care or other types of services for seniors; nevertheless, implications for the funeral business are guaranteed.

Here is the birth data2 that delivered us to our downward sloping future:

Number of Births and Annual Birth Rate for the United States: 1909 to 2012

Who are the Baby Boomers exactly?3

The baby boom in the United States was marked by a substantial rise in birth rates post-World War II. Two features of the baby boom differentiate this increase from those previously experienced: the size of the birth cohort and the length of time for which these higher levels of fertility were sustained … In 1946, there were approximately 2.4 million baby boomers. By 1964, the last year of the baby boom, that figure had reached just shy of 72.5 million.

To put that figure into perspective: as the population chart shows the entire U.S. population was barely double that figure at the beginning of the Baby Boom era. That’s a big group of people entering a society in less than 30 years’ time.

Finally, what I call “the Table of Destiny” for the Baby Boom generation4.

They brought us acid rock, minivans, and “50 is the new 30,” and made the fluffernutter a culinary staple, but the string of historic triumphs for this miraculous generation, of which your humble narrator is a most humble member, appears headed to the fate of all living things. 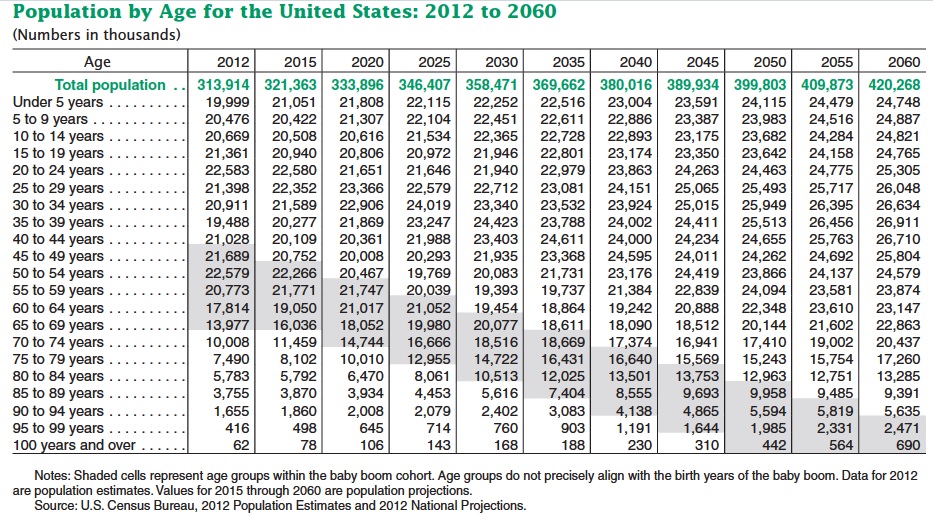 The shaded section are the hard numbers of the Hula Hoop demographic. And the progress depicted here is not only the demise of a market but, I believe, the birth of a new era of death.